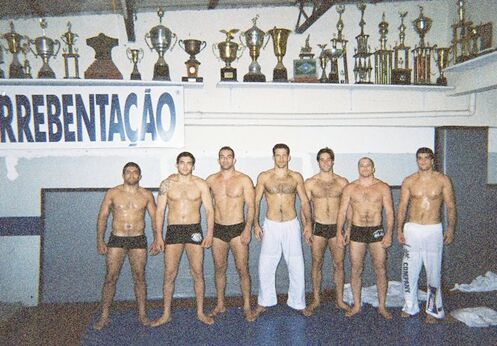 During the year 2000 is when The Split occured. Many of Carlson Gracie's BEST Jiu-Jitsu Fighters decided to leave the CARLSON GRACIE TEAM and form a New team - BRAZILIAN TOP TEAM Re: Money/Politics = Two Evils. This caused major turmoil between Grandmaster Carlson Gracie and the newly formed BTT. My brother Antônio Rodrigo Nogueira, with his twin and I under his wings, joined Brazilian Top Team. Also my main instructor Marcus "Conan" Silveira endorsed that I split and join BTT. That's exactly what we did!
​ 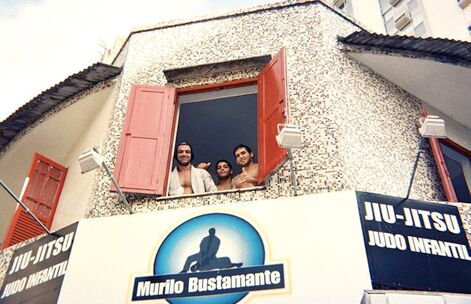 Summer 2000  BTT The beginning Training in Leblon. Nobody anticipated the split from the Club Carlson Gracie, so when it happened we needed immediate infrastructure - Murilo's academy would be one location, in addition the Associação Atlética Banco do Brasil. Eventually we transitioned to training full-time at AABB, then training only Saturdays at Murilo's. Bustamante Jiu-Jitsu academy was a small gym with a unique shape, but we did serious work there. Intelligent studies and hard fought battles.

PRO Training started 11:30Am and went until 1:30/2Pm, This training after the earlier 10Am Kimono Fighter class [I DID ALL --And still went to Luiz Alves Muay Thai OR Ricardo de la Riva gym for classes in the late day/evening Kimono Fighter --Then at night exercises with Fernando Margarida at Barra Beach coconut water pull-ups push-ups parallelas til Beat!].

Rodrigo would always show up at 2Pm because he was on his own time North Brasil time - I'd stay with one or two others, and More Fight -Minotauro was FRESH! Just like that, own up and BRING IT! That the protocol. Don't veer. Champion need be Focused like the hourglass all energy feeding down one line ATTACK one task at a time
​ 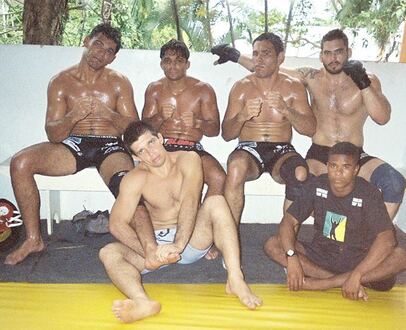 Antônio Rodrigo "Minotauro" Nogueira was leading the way as BTT Heavyweight Jiu-Jitsu Fighter, and he was on the rise Fighting successfully in Japan. He was a real mentor to me, and someone to emulate. He was kicking ass, and we were all on the train. Talk about Discipline and Sacrifice Rodrigo kept to a diligent regimen of hard training, and always focused on the Task at Hand WINNING.

Rodrigo took Action to catapult himself closer and closer to achieiving his goals.  He didn't shy from opportunity, no matter what or how big the challenge. PREPARATION was always a Priority // He did the Homework and it paid off! TRAIN // No Excuses

FIRST BLOOD
In-house regulators on a daily, very few visitors. When visitors showed up They Got Served // Beat up so Never come back WE MADE SURE OF IT  I can recall arguements countless times with teammates over who would get first dibs when visitors walked through the door. Who wants left-overs? Not me. Nothing like First Blood!

Old school training shorts, MMA gloves, cup and mouthpiece. The training was Tough every single day. Plenty of groundwork, but we also practiced takedowns and did lots of BLOQUEIO A Necessary Nightmare that offered minor spurts of Glory. Bloqueio translates to "Block" in Portuguese, a defensive mechanism. Basically, one fighter puts small gloves and shinguards (if you are lucky) and comes after the other with an offensive onslaught of strikes (usually no head-gear, to emphasize "there's no fallback!"). Fighter in training had to achieve the takedown. Once the takedown was achieved, Get up! The process continued, but against a fresh attacker everytime -and you better believe, The hitters come after you! This process over and over again, until coach was satisfied with the work, or the beatings were so bad that it brought the training to a halt. Tough sessions, day in day out..

My eyes witnessed and experienced some real hardcore shit! It's not for everybody you know, Brazilian Jiu-Jitsu at the level and with the objectives we were chasing in the Arena of mixed martial arts. I can tell you, I was ALL IN! And my Actions did the speaking. I knew my DISCIPLINE was appreciated and I was Honored when the coaches would choose me, eventually most of the time, to lead the way in the warm-ups. This is where my decade of wrestling paid off..

NO SHORT CUTS (whatever it is you choose to do in life) It's a choice! Champion SACRIFICE isn't for everyone.

The coaches didn't have to do any work, they knew I would push the boundaries by leading an intense and rigorous warm-up. Reality is, most people are slow to get things going. There's something to be said for the one's who are willing to ATTACK The Task At Hand.

Lesson to be learned for the reader, ACTION Makes things happen! Nothing to be earned falls from the sky. Most parents tell their kids to chase their dreams. Well, that's a nice thought, but from my experience, strongly consider CHASING YOUR EFFORTS
​ 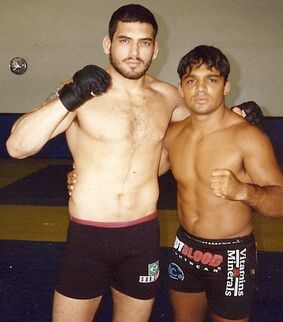 Above pic Dustin Denes and Alexandre "Pequeno" Nogeuira, King of the Guillotine
Pound for Pound arguably the best guy in the room. Master of technique and strong as a FN Bull!

My decade of wrestling experience paid high-yield dividends in the room at Brazilian Top Team. My wrestling experience Earned RESPECT because I knew how to wrestle/experienced wrangler, I could take most of the room down, except for a few next level contenders. In particular both High-Powered, Paulo Filho armed with Judo and Ricardo Arona who was like a Tiger. Also routine training with Vitor Belfort -Fast, strong, and agile on the feet! Belfort honored my service, because many times I'd meet him for training at 7Am, and I was consistently Punctual. DISCIPLINE is doing what you don't want to do when you don't want to do it. And COMMITMENT Are you in, or are you Really IN? I was ALL IN. Reminder, the hourglass.

Honorable mention to Alexandre Pequeno because he'd "Dial me in." I could consistently take him down a few times at the beginning of training sessions, but eventually he'd mark the timing and placement to lock me in --via Guillotine.

Pequeno was a very successful luta-livre Freestyle Fighter - Longtime Shooto Champion in Japan. He came to us when he suffered a loss, and needed to redeem himself against the same Fighter in Japan --this time to defend his Shooto belt. Murilo Bustamante shared with him higher education from the guard position, and Pequeno went on to redeem himself and successfully defend his Shooto World Title against Katsuda in Japan.

Pequeno shared with us many unique and very-powerful submission techniques. I recall there was day when he was showing his Anaconda/Inverted Anaconda series to the circle at BTT. There had to be thirty black belts on the mat that day, eyes opened with amazement! For what was new to us, but would become foundation technique.

Humble person and a Great champion man of few words, someone to emulate in Alexandre "Pequeno" Nogueira. 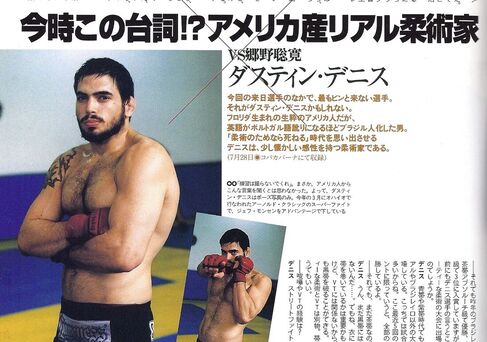 I, Dustin Denes, am Honored to have shed blood, sweat, and tears day in and day out at Brazilian Top Team during the era of 2000-02. Most of my time was spent living and training in Rio de janeiro during the time, and when I was there - I was at the academy Monday through Saturday, diligently first to arrive and last to leave. It was an exercise in Discipline day after day, week after week, year after year. Good days and bad, plenty days hurt, injured, or not feeling up to it, I still showed up Determined and Committed to do the work.

I remember one day I was very sick with a stomach virus. Minotouro saw the horrible shape I was in, and insisted that I stay home and rest from training that day. What my brother prescribed for me was not in my vocabulary. My DETERMINATION had a destination depended on Speed to Momentum // Doing the work consistently so I went for the academy in Lagoa, but had a minor detour on the way. I was in such Pain while making way for the academy, that I had to lie down on the sidewalk outside of a bank in Leblon. I looked like a homeless person for sure, but could care less at the time. The stomach pain was horrific, however after a short while I managed to own up, push through and make it to the academy.

In serious Pain, but COMMITTED To The Task At Hand And Ready to Train, Minotouro looked to Libório and mentioned my condition. Libório looked to me and said "Clean, you are Not training today." I replied "Yes! I am," Libório then looked me in the eyes with evil eyes and said with authority, to not be challenged, "No, you are Not Training Today!" Hey, it was outta my control, I didn't train that day, but the principal stands --I showed up to do the work.

Necessary to become a Champion DISCIPLINE Good days and Bad -Gotta Get it done.

However, I was HONORED knowing that coach was looking after my well being.

Otherwise, I'd Honor my service to my Team/Training even if it meant death.

You wanna show up? Quite frankly, just take a walk.. save yourself the PAIN and SACRIFICE involved, because it's Blood In Blood Out .. Trained To show No compassion on the battlefield .. Reserved For the one's willing to Push Thro is the other side of Pain..