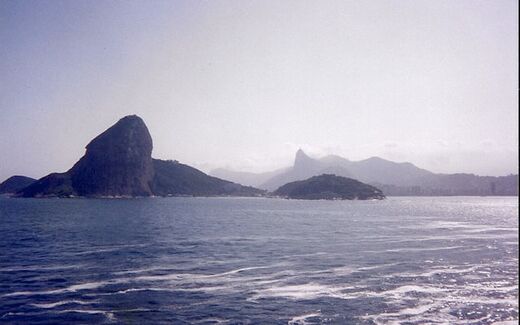 a foto 2001 Rio de janeiro
view from Niterói. in the distance center is Corcovado/Cristo
It was dark out and confusing. I was running fast through an endless forest with an expired passport that needed to be renewed. And thinking to myself "NO! NO! WHY AM I IN AMERICA - USA ? NO!!!"

Then all of a sudden, I woke up startled 3Am. I got up and looked out the window to see the mountains. It was all a horrible dream. I was eased almost immediately. I knew I was safe. I was home in Rio de janeiro. February 2001
​
Reality was, the Absolute BEST Jiu-Jitsu training was in Rio de janeiro. That's where I needed to be.
​ 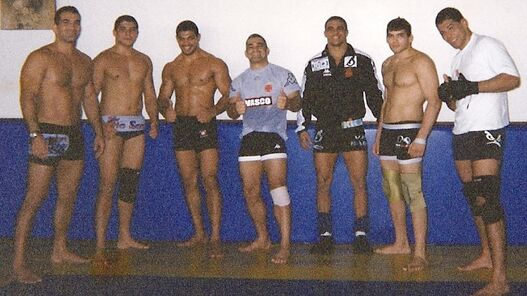 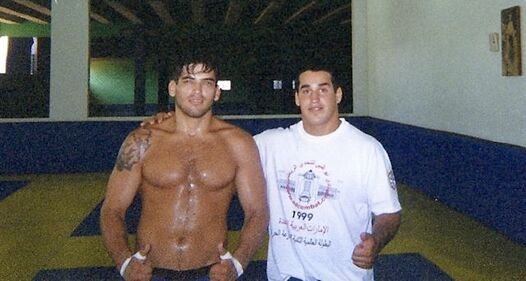 ​Don't be fooled. I've a huge amount of Respect for The General. He defended the flag of Jiu-Jitsu in MMA.
​
Not the other guy. Why just one real fight? Because he was scared and bailed.
I can still hear his lady. she was mocking me when I was down on points. I didn't hear her at all after my reversal. haha
I remember when MG showed up to train at American Top Team, he proved himself a wannabe Fighter. ATT I fought for that name.
Jiu-Jitsu Fighter is reserved for the one's who Defend the flag of Jiu-Jitsu in MMA.
Not For MG. He can enjoi the sandbox forever. There he can be king.
Never forget he got served by me. Ainda tapped early.
BTT! Eu sou Campeão Brasileiro 2000
SURFIGHT Forever WE GOT YOU!!! 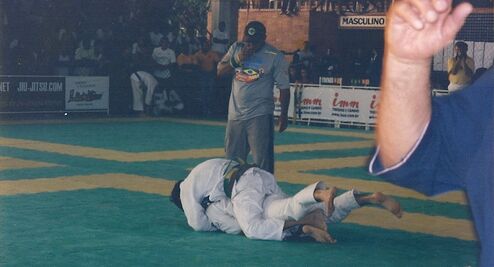 a foto Dustin "Clean" Denes terminando com Marcelinho
data 22 de outubro. 2000
Patrocinio SURFIGHT
locale ICJG Rio
Pay attention to this lesson. 2001 was the year where I turned Speed to Momentum. The year prior was really tough for me but I managed to BREAKTHOUGH and become Brazilian Champion 2000. As tough as it was I never quit. There were so many short term failures (tough losses) But I never lost sight of the BIG Goal. EFFORT and Forward!

No matter what the adversity. Never lose sight of the BIG Goal.

I came into 2001 with Momentum. I received a phone call from the United States one day in the middle of February, it was a close friend of mine and powerhouse training partner. He presented me with an opportunity to grapple against Jeff Monson, reigning ADCC champion. Jeff was a hard-nosed wrestler/white belt in Jiu-Jitsu but became well-known for defeating many high-level Brazilian Jiu-Jitsu Black belts. I was a Brown belt at the time, but that didn't matter. Most important, I was hungry like a lion. DETERMINED
I accepted immediately, with the grappling match scheduled for March 3. 2001 in Columbus, Ohio. I had a couple weeks to train specifically for the opponent. Training went well at BTT. It was a huge opportunity for me. Practice. More practice. Discipline. Sacrifice. Preparation. No excuses. No shortcuts. DO THE WORK!!! That I did.

Before I travelled to grapple against Monson, I asked teammate Fernando Pontes about his thoughts on my upcoming match-up. He said "IT'S YOUR WAVE. GET IT!" His words resonated with me.
​
Monson was supposed to weigh-in at 205lbs. I never saw it. Didn't matter. I was DETERMINED There was a little confusion with my Usa supporters/team. The main coaches expected me to use their Florida academy name next to mine. I did the same with DLR all the time, couldn't use the name. Warrior code. I Love and Respect my roots. But during that time, I was a BTT Soldier my duty to represent the Brazilian Top Team. Ultimately my coaches understood.

I remember being scared prior to this match. Monson had defeated several black belts, legends. But no problem, coach CONAN had imperative words for me. He told me "CLEAN Everyone has the Fear. Some people control it better than others." Marcus "Conan" Silveira I love you forever coach. Thank you! For the readers, Please take the lesson to life.

OWN UP and choose to put Fear in its place . . . The backseat!

As for the match, I was on the attack the entire time. Monson survived me at best, a relentless onslaught of triangle attacks. He valiantly tried but absolutely couldn't do shit! That's right. I DID THE WORK!!! No Excuses. No Short cuts. I did the work when nobody was watching, showing up early and leaving late. Practice. More Practice. Discipline. Sacrifice. Decisive victory in my favor. 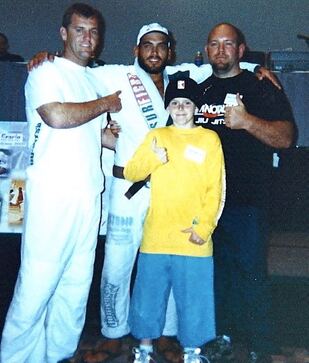 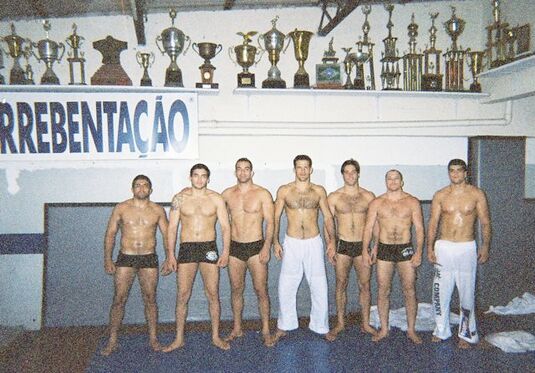 Proud of my roots. Jiu-Jitsu Carlson Gracie Real Fight. Practice. More practice. Basics. Discipline. Sacrifice. DETERMINATION Tough training. You had to walk in that dojo Focused and Ready to work. The level in the room was very high. Everyone FIGHTING TO WIN!
"Dustin is a great person, excellent fighter and coach. He is a master in the triangle choke, the best in this submission."

Murilo Bustamante, Brazilian Jiu-Jitsu Real Hero and Former UFC Champion
​
"I've met Dustin first time with Rodrigo Minotauro Nogueira. It was back on the 90s. Dustin was a young kid and right away I could see his perseverence and will to learn JJ. For sure he was the first foreigner I saw that could really understand the concept of BJJ as a martial art. His biggest asset an an athlete, was not just the speed that he learned the technics, nor his respect to his training partners... His biggest quality was shown when he started to develop his own technics. It is a pleasure to see how far he went as an athlete." 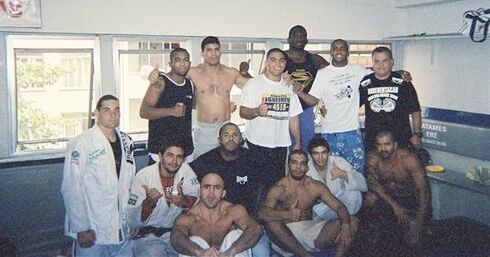 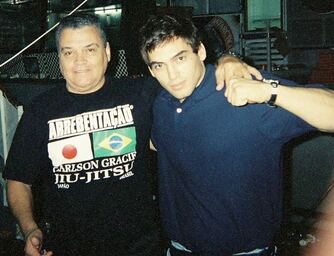 ​Taken from my notes on the day: January 9. 2019 was an epic day at Ns oahu. The waves and conditions allowed for Laniakea to work at its best. It was also really crowded because the waves were so good. Nothing small on a day like so. More like three-story buildings filing in one after another during the sets.

DETERMINATION made the difference for me. Plus I had already been surfing at Lanis diligently for an entire month prior to the day. I had much study time. Preparation. Practice. More Practice. Discipline. Sacrifice.

I paddled to the far outside and deep. I was definitely nervous because it was one of the bigger days at Lanis. I Focused on an important lesson that uncle Thomas from south shore taught me "I'M NOT GONNA BE SCARED!" I made a Conscious choice  To own up and Face the fear. The set came and I went over the first wave to see the bigger wave powering in from behind. I Committed and I didn't look back. I Got it! Speed! Glide. I passed like 50-75 people who were on the inside. It was absolutely surreal. By far the biggest right I ever caught in my life. Murilo Bustamante was there with us surfing that day.

Forever grateful LOVE you Jedi Master, uncle Thomas. THANK YOU! For showing me the way.

I paddled in after that wave to celebrate the stoke. I was TOP OF THE WORLD! Most surfers weren't as excited. The Pros were scoring. But for most people the waves were too challenging and it was crowded. I saw uncle James Jones as I was getting out of the water. He was getting ready to paddle out. I remember sharing the stoke with him and he was so Proud of me. At that moment, my spirit went to a safe place. Proud of the all the Hard work. Practice. More Practice. Discipline. Sacrifice. DETERMINATION Uncle James is always surfing at Kaisers. Diligent surf daily, south shore at Kaiser bowls. He shared so much knowledge with me.

Forever grateful LOVE you uncle James Jones. THANK YOU! For your focus and for always sharing your knowledge.

What happened out there that day at Laniakea was No accident. I was diligently surfing there for a month prior, studying and getting plenty of amazing waves, but also experiencing plenty of violent wipeouts. Preparation. I DID THE WORK And when the opportunity presented, I was ready. It was my wave, and I GOT IT!!!
​ 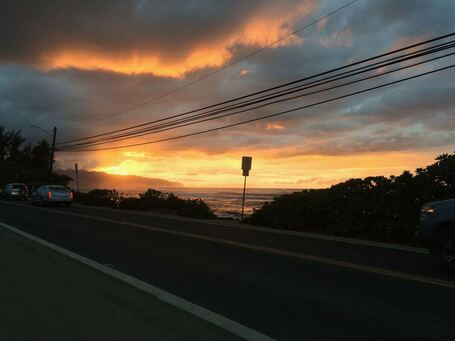 a foto Laniakea fire in the sky sunset
"The Hero and The Coward feel the same. It is the action, that differentiates them." Cus d'Amato
MORE ARTICLES link here
Proudly powered by Weebly