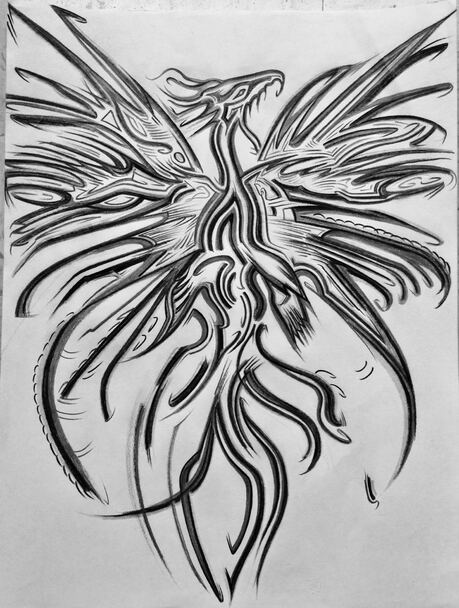 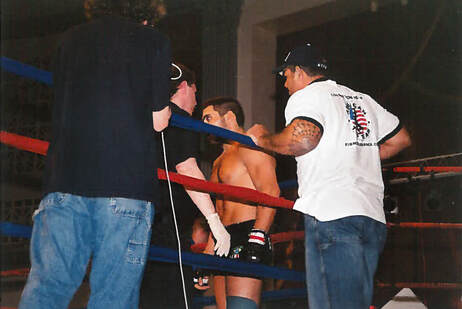 Above pic red corner Fighter Dustin Denes and Coach Marcus "Conan" Silveira
Evento Hook n Shoot Professional MMA
Clean sponsors ATT & SURFIGHT
Data 25 de Maio 2002
​
Have you ever been in the ring with a Raging Bull ?
​
​Most likely you haven't, well I have. And I'm here to tell you that it's a battle you can Win. PREPARATION is key.

Goals and Affirmations played a major role in my life, especially in winning. Victory is sweet, but there is much more Pain involved in the journey. I won the Greatest of victories, but I lost a lot more. Difference is I refused to quit! Determination and Goals kept me focused on the objective, not on short-term losses. From my experience, I strongly consider you stay focused The BIG Goal.

I was undefeated and with a couple victories before the fight against Tom Jones in May 2002. I performed a debut hit for American Top Team in January with a submission victory over George Allen. Then another in March when I submit Eric Schaffer, but that was a combined hit for Brazilian Top Team and ATT. My next scheduled hit would be in May 2002 and solely under representation of American Top Team. A diligent training regimen and winning results changed Speed to Momentum.

More Experienced, but still fighting up in weight at 205lbs. I was confident in my skills and my ability to better manage The Fear. There was much less tension inside of me leading up to this fight. I was confident and ready to go, but things changed when I got in the ring. I briefly looked over my corner and into the crowd, to see friends and supporters enjoying themselves. They were drinking beers and laughing. I then looked across the ring at my opponent, he was heavy and built like a brick shithouse. He was pacing and staring me down with a nasty look. He looked like a Raging Bull! I was scared. It became clear to me that I was in the wrong weight class. The guy was significantly bigger than me. I wasn't having fun. But that's Ok, because fun is not what I signed up for.

I signed up to Defend the flag of Jiu-Jitsu. For The Love. Not for money. Not for politics. Not for ego.

I remember the referee coming over to our corner and saying to my coach "Protect your Fighter at all times." I never liked that visit from the referee, it sounded more like "Prepare to Die!" The last words I'd hear before the bell were always the one's I cherished the most from Conan. He'd always say "Let's go baby!" Those words, all I needed and I was ready to perform the hit. The foundation of those words: Sacrifice. Discipline. Pretty simple DO THE WORK And that we did!
​
World-class rivalry, American Top Team v The Lion's Den
Above vid Dustin Denes v Tom Jones
Evento Hook n Shoot Relentless
​Locale Evansville IN USA
Data 25 de Maio 2002
​
Tom Jones must've looked good for a couple minutes. He was talking shit to me too. But all that ended when he got served! Yours truly, King of the Triangle put 'em in the danger zone and sent 'em on a one-way ticket to HELL! He defended the choke but forget about his arm in the process. You know it, I'm the guy to rip it off! And put the waiver to work. That I did. Too quik to tap, he screaaamed! I didn't want to let go, but the referee made me.

I always disliked when the referee interrupted with my work, my Masterpiece. Damnit, I wanted to Break it!

That Triangle/Arm-lock combo is classic. I hit it once to finish that fight! But rest assure, I practiced it for years and years at the academy. DRILL Techniques Like anything in life, it looks easy because somebody's working so damn hard to make it look easy. Whatever it is your choose to do in life CHASE YOUR EFFORTS Practice. More Practice. Discipline. Sacrifice. Be Passionate.
​
MMABLOOD "Break it!" link here
KING OF THE TRIANGLE link here 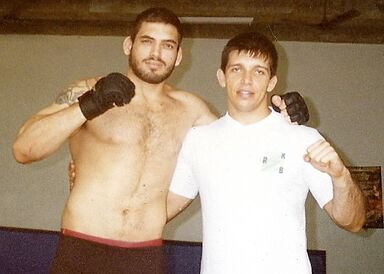 Above pic Dustin Denes and Moacir Omena de Oliveira
Locale Brazilian Top Team AABB
Data 2002 Rio de janeiro
Bons tempos​
​
Thank you Professor! I am Grateful for the one's who helped me grow. Moacir "Boca" played a major role in catapulting my Jiu-Jitsu to higher levels over the years at Ricardo de la Riva's, then BTT, and eventually ATT.

I'd wait for him anxiously on his days at DLR's academy in Copacabana. Waiting for what? For my medicine. He would beat the shit out of me on a regular basis in kimono. 3 x 10 minutes was a standard dose, usually meant he was beating me up for most, if not all of the training time. Then he joined us at Brazilian Top Team where I could consistently get the takedown, but definitely felt the heat once we hit the floor. Still, I managed to get some on him. He eventually moved to Florida where we continued with Progressive trainings. He helped me train Jiu-Jitsu for the Tom Jones fight. And you wonder how I achieved victory? Toughest Task 1st

Remember, you're as good as the people you train with. From my experience, strongly consider seeking out the one's who consistenly give you a a hard time in training. Like so, over time you'll see solid improvements in your game. Own up and Get after it! 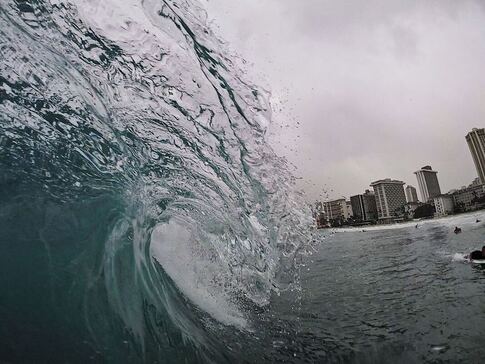 Above pic South Shore Oahu, aka Town wave
​
Taken from my notes on the day: August 23. 2018 was the day when Hurricane Lane's swell was at its best. Morning session was good with the swell incoming then to peak in the afternoon. I dialed a nice read on the swell and scored waves with Jonny Z at the morning session. I was looking to score in the afternoon. Goal catch the bigger set waves far outside at Kaisers left. I showed up Determined and Focused to the afternoon session. I paddled straight to the top and Committed on a helluva wave. Got in, up, and crouched locked into the high face lotta power.

Same wave lots of cover-up in my eyes because the wave was breaking in my face. Got clipped parallel by the power and made it! Recovered with insane speed to a mean bottomturn and frontside bash the lip. The adrenaline of that wave, wowow. I finished it screaming in excitement. I F%ckin made it! And do you know why I made it?

Because I Believed in myself! I Prepared myself! I never lost sight of the BIG Goal. PREPARATION. BELIEVE.

Lotta waves that day, but the one mentioned above by far the Memorable.

Feng shui was with me // O Billabong Blues shorts performed the hit!

BELIEVE IN YOURSELF!
Testimonial

I first met Dustin Denes or "CLEAN", as he's affectionately known to the world as, on January 10th, 2014. That day would turn out to be one that I would never forget. The Chop Certified experience came highly recommended by two Brazilian JiuJitsu black belt friends of mine that I highly respect. So, I decided to invite him out to our academy in Kona on the Big island of Hawaii and in his prophetic words "Kona will never be the same" and he was right. His passion and intensity for not JiuJitsu, but life it self is very apparent when you first meet him. The way his energy just radiates out of him is very powerful. In Hawaii we call that "Mana". "Mana" can be known as a high spiritual power or having a strong sense of presence. His no non sense, no excuses approach to things on and off the mat is infectious. Just being around him causes you to level up in everything you choose to do.

His "take no prisoners" attitude on the mat is absolute GOLD! His "sharpen your techniques and shove it down people's throat" mentality is GOLD! His motivational talks and classic one liners are absolute GOLD! His book recommendations are absolute GOLD! His go to sleep at midnight and get up at 2am to drink tea and game plan, is rough, but absolute GOLD! His "I thought you wanted to be a Champion?? You're going to die on the beach" is absolute GOLD! His Heart absolute GOLD! His chosen way of training is extreme to mostly everyone he meets. His way of life is too hard for a lot of people to digest and it isn't for the faint of heart but its very effective if you don't be a pussy and accept it. His style is raw and grinding but it works, no frills!! I go on and on day and night about CLEAN but until you experience it yourself, you'll never really know the true value of Chop Certified. In his words a couple GOLD nuggets "get on the bus or get off", "GOLD counts" and "do you need it or do you want it? There's a huge difference."

He's been a training partner, a teacher, a mentor, a friend and now a brother that I consider part of my Family, or known in Hawaii as 'Ohana. I will always be a proud member of Team CLEAN!! #ChopCertified FOR LIFE!!