MY GOLD: SERIOUS AS CANCER 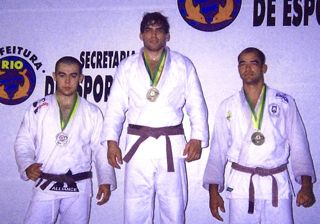 Above pic // Dustin Denes Gold, Marcelo Garcia Silver, and Anderson Leal Bronze
First and foremost, BIG Thanks to all my coaches and teammates who helped to make it happen!
"I knew I was going to beat Marcelo Garcia." That's why the story of My Gold is rarely told. However, because the team, students, and fans from around the world continue to inquire, I've decided to share some memories.

I fell short of Gold in my weight class on October 21, 2000, left with a bronze medal and the taste of shit in my mouth, so I consciously chose to attack the Absolute division - All weights combined - in a state of Certainty. I was a man on a mission the following morning in Rio de Janeiro. Pissed OFF for Greatness!

At this point in the story, people usually say to me, "what do you mean, Pain?"

Pain of losing. I hate losing more than I like winning. I lost so many times in my 15 years in prior competition, in wrestling and Brazilian Jiu-Jitsu. Pain of sacrifice. The sport of wrestling taught me about discipline at an early age. 5am workouts since the age of 10 years old will piss anyone off! Most important, Pain of others. From early on in life, I noticed that life was not fair, pushing pain on my family, friends, and teammates. Glory - The pain reliever.

I was built for winning on October 22, 2000, considering my 15 years of sacrifice, determination, leadership, and focused commitment to what I can control. It didn't matter who showed up on that day, it was to be mine - The Gold.

Brazilian Championship - The Toughest Tournament. Brackets were stacked, all the best Jiu-Jitsu fighters of Brazil and the world, from all teams and weight classes. My certainty and all submission victories on the day saw me to the finals against another top competitor - Marcelo Garcia. I had seen his picture many times prior, always the case, him on 1st place. For this day was to be different!

MG was backed by a very strong Team - Alliance, versus our team - Brazilian Top Team. He was under watchful eyes of Fábio Gurgel and Castello Blanco, up against us - BTT - Rodrigo Nogueira, Zé Mário Sperry, Ricardo Arona, Paulo Filho, and Amauri Bitteti. I recall MG looking at me in the bullpen - not in a bad way, but I kept to the business of winning - so hard stared him in return with incredible confidence. This was it, finals of the Brazilian Championship.

No surprise, I was losing minutes into the match, but worse was the sound of Marcelo's girlfriend saying something like - translated from Portuguese "Marcelo, you're winning 3-0, you've got this!" My determination saw me through to turn the tide, with me gaining the lead 6-3 and in dominant position. No more cheers from his girlfriend, only cries! I punished Marcelo with a ferocious and relentless back attack. For minutes prior to the submission, he experienced pain, discomfort, and suffering. Punishment due!

From then on, MG became My Gold - But really not about me, about the others! The Team. 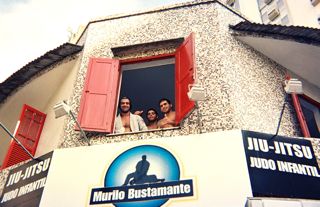 Above pic // BTT 2000 The beginning - a few from the Team: Zé Mário Sperry, Ricardo Arona, Dustin Denes
Glory is fleeting.. However lessons are timeless. To name just a couple of the lessons here 1) Run with Champions and YOU WILL WIN!!! 2) Always follows The Sacrifice and Hard Work, are Results! Day after day, week after week, month after month, year after year, and YOU WILL ACHIEVE!!! And when you do, Focus on what's ahead!

​Key is, Make it about the Team!
Proudly powered by Weebly