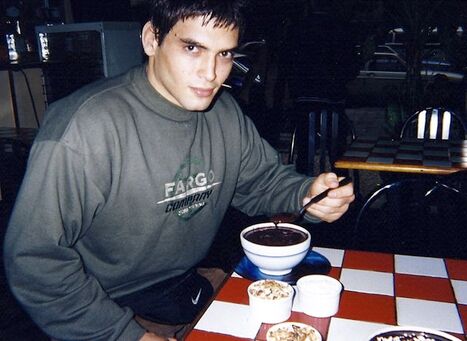 a foto tomando açaí depois do treino
locale copacabana rio de janeiro
ano 1999
Have you ever hit the bottom, pushed thro the pain and reached the top ?
​
I have, and you can too. Truth be told, I never won a single match in purple belt. I did exceptional in the training room with my finisher style. I'd submit black belts daily with my "Triangle via asshole guard!" However I fell short at competitions because I lacked a game for tournament. If you want to get better at anything, you've got to work at it! Practice. More Practice. Discipline. Sacrifice.

Failure is short term, as long as you Never lose sight of the BIG Goal.
​ 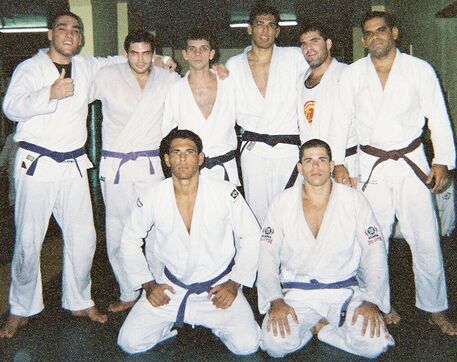 a foto Maurinho. Clean. De La Riva. Rodrigo Minotauro. Grosso. Gavião. Rogério Minotouro. Bocão
academia Raul pompeia. Copacabana. Rio de janeiro
ano 1999
​
1600-2000 Monday to Friday with RICARDO DE LA RIVA Direct CARLSON GRACIE lineage but DLR's students wouldn't train at the Clube Carlson Gracie vice versa, because the teams would compete against each other. I competed for the Clube Carlson Gracie, but I was an exception to the rule because of Minotauro. He got me IN! Surround yourself with the right people.

My game evolved exponentially at De La Riva's, especially for competition. I did the work. DO THE WORK !!!
TESTIMONIAL

"Dustin is a great person, excellent fighter and coach. He is a master in the triangle choke, the best in this submission." 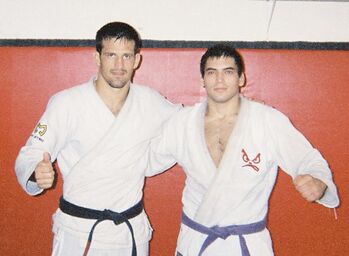 a foto Murilo Bustamante and Dustin "Clean" Denes
locale Academia Murilo Bustamante, Leblon
ano 1999
​
A couple days per week were spent training from 1100-1400 at Murilo's academy in Leblon, always Saturdays. We were still with the Clube Carlson Gracie during 1999, but we changed up the training atmosphere twice a week. Eventually in the year 2000, we'd split from Carlson Gracie to form Brazilian Top Team. However the roots forever stained the same JIU-JITSU CARLSON GRACIE !!!

The training was tough all day everyday (except for Sundays). Too much work to be done and progress to be made.
Here's to Real world education (Not college books and Bs) 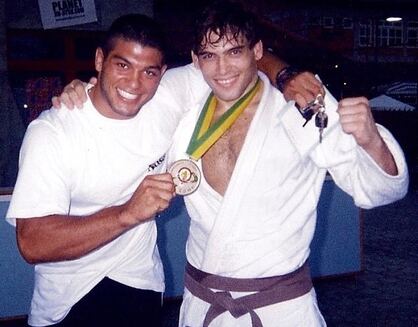 a foto Ricardo Arona and Dustin Denes
locale Campeonato Brasileiro
Rio de janeiro BR 2000
The picture means a lot to me. I trained diligently with Ricardo Arona at Clube Carlson Gracie when I was a purple belt (he was brown belt) then continued at Brazilian Top Team (thro the ranks and as black belts). He would destroy me daily, but I would always make it a fight! The results took time. I had to push through tough times in purple, but I was too passionate to acknowledge the pain. Finally in brown belt, it came together for me --Golden rain! It was no accident. Practice. More Practice. Discipline. Sacrifice. PREPARATION
BRAZILIAN CHAMPION 2000 link here

On January 26. 1996 the sport of wrestling lost one of its Greatest heroes, Dave Schultz [2X Olympic Gold Medalist].

As a young wrestler I always looked up to Dave Schultz. He was a BIG Hero to me. He went against the grain, travelled overseas to study the competition (Russians, Iranians, etc.) and compete at the highest level. Dave was a real technician who added danger to his moves. Smart, very smart. I get it! Train harder and smarter to beat the best, but also be able to hurt 'em in the process (in case opponent has better technique). Design moves for both winning and doing damage at the highest level, YES!! R.I.P Dave Schultz

I needed a new hero in the sport of wrestling. Intense studies led me to discover a Russian by the name of Buvaisar Saitiev. My roots Russian and Ukranian, so I was very content with the choice of study. Buvaisar went on to win Olympic Gold 3X !!! The poem was a staple for him, and that's when/why I added it to my arsenal. It's Powerful! Do yourself a favor, read it all. Take it to life.

It is not seemly to be famous
Celebrity does not exalt;
There is no need to hoard your writings
And to preserve them in a vault.

To give your all - this is creation,
And not - to deafen and eclipse.
How shameful, when you have no meaning,
To be on everybody's lips!

Try not to live as a pretender,
But so to manage your affairs
That you are loved by wide expanses,
And hear the call of future years.

Leave blanks in life, not in your papers,
And do not ever hesitate
To pencil out whole chunks, whole chapters
Of your existence, of your fate.

Into obscurity retiring
Try your development to hide,
As autumn mist on early mornings
Conceals the dreaming countryside.

The others, step by step, will follow
The living imprint of your feet;
But you yourself must not distinguish
Your victory from your defeat.

And never for a single moment
Betray your credo or pretend,
But be alive-only this matters-
Alive and burning to the end. 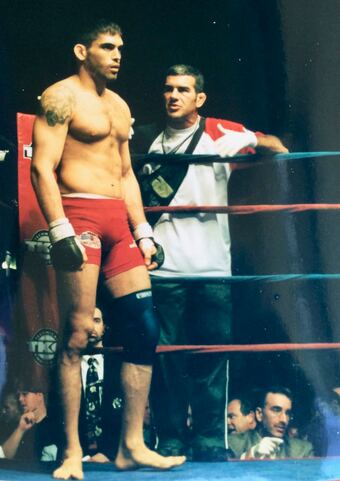 a foto Dustin "Clean" Denes and Marcelo "Brutus" Silveira
JIU-JITSU CARLSON GRACIE !!! Holdin it down for AMERICAN TOP TEAM
locale War Memorial auditorium, Fort lauderdale, FL
Faixa Preta
​
Another pic that means much to me. BRUTUS worked my corner that night. CONAN was fighting on deck in the main event. It all worked out for the best because Marcelo was my original Brazilian Jiu-Jitsu instructor from the Carlson Gracie MIA-RIO. He was my teacher when I walked into the gym for the first time as a white belt. I was a Black Belt in the ring, with him there by my side. Proud!

Before you see the fight, it's important to understand a little backstory with a BIG Champion Mindset. The weigh-in and brief press conference were held the day before the fight. I kept to myself at the weigh-in, but my opponent chose to approach for a handshake and brief chat. I wasn't having it! My opponent got what he wasn't looking for, the stare of death and no hand to meet his for a shake. Better he burn in hell! I had job to do, and making friends was not in the protocol. Practice. More Practice. Discipline. Sacrifice. Why ?